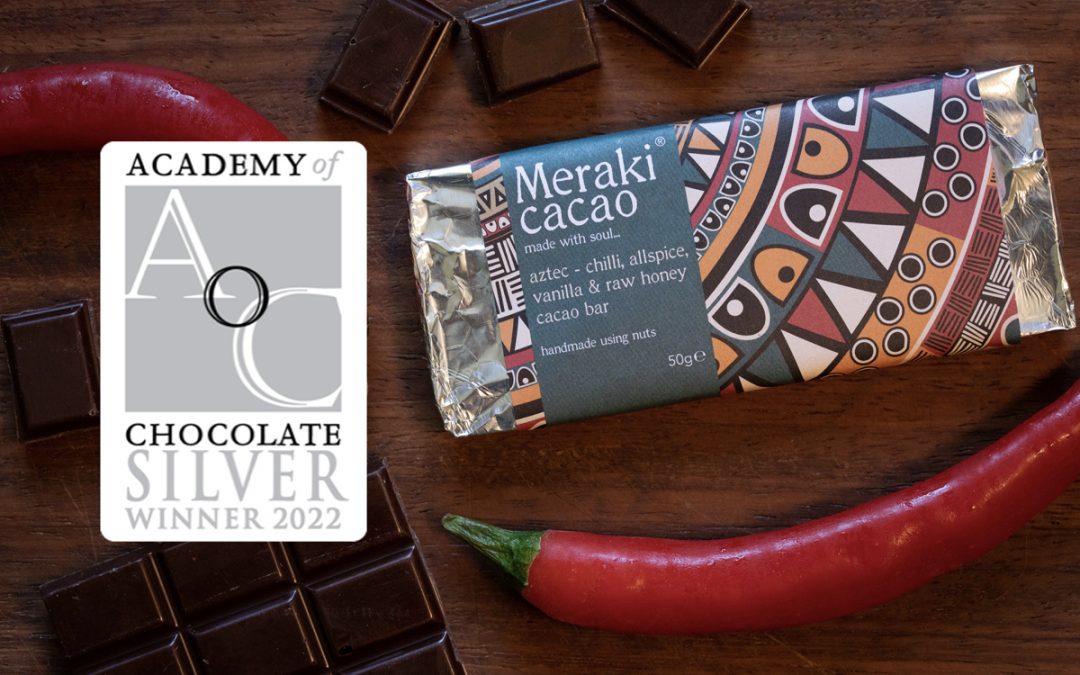 Earlier this year, we were encouraged to enter the Academy of Chocolate Awards.

Here’s what the Awards are all about –

Launched in 2005, the prestigious Academy of Chocolate awards sought to identify, recognise and showcase the world’s most talented chocolate producers and finest chocolates.

Since then, the awards have gone from strength to strength – mirroring the growth of the fine chocolate market. In its inaugural year, there were 12 entries. By 2019, that figure had grown to more than a record-breaking 1,600 submissions from more than 45 countries.

The awards are judged by leading chocolatiers, producers, journalists, bloggers, food writers, and other chocolate experts from across the industry.

Products are marked on appearance, depth of aroma and flavour, length and complexity to determine the gold, silver, and bronze winners in each category. Promising products that are not yet at award-winning level receive commendations.

In 2019 the Academy also launched a new Brand Awareness Award, which celebrates the pleasure of enjoying chocolate as a complete moment-by-moment experience, from attractive, functional packaging to enjoyable mouthfeel. In addition to the ultimate accolade of The Golden Bean and The Golden BonBon, the awards also seek to identify Rising Stars both in the UK and internationally.

As you know, we entered our Aztec bar into the Dark Bean to Bar Flavoured Category. Although we do not winnow the beans, the judges also wanted to allow products made directly from nibs into the awards.

The results have just been announced… and we are delighted, surprised and humbled to have been awarded a SILVER in this category. We are absolutely over the moon with this result, as it is some achievement to win an award, especially given the extremely high calibre of producers who have also won awards. It has given us much confidence to be highly acknowledged by such world-renowned judges.

Here’s what the judges have to say about our Aztec bar:

Great texture, and a well balanced mix of flavours – unexpected given the complexity of the combination, but nothing is too overpowering. All the judges found the bar delicious, though one felt that maybe slightly fewer nibs would make the chocolate itself stand out more.

We are so happy with this result. We know Aztec is a great favourite of many of you, and now you can enjoy it even more, knowing it’s an award-winning product!

You can find the complete list of winners here.